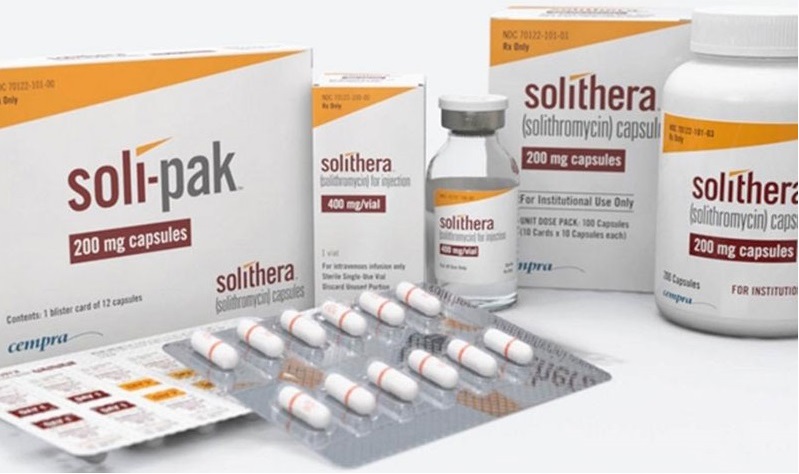 Solithera (solithromycin) is a next-generation macrolide antibiotic developed by Cempra as a treatment for community-acquired bacterial pneumonia.

Two new drug applications (NDA), one for intravenous and the other for oral formulation, of the drug were submitted to the US Food and Drug Administration (FDA) on 1 May 2016. The US FDA accepted the two NDAs for review on 5 July 2016.

"It is the most common type of pneumonia diagnosed in the US, with five to ten million cases reported each year."

A marketing authorisation application (MAA) for the drug was submitted to the European Medical agency (EMA) on 28 June 2016.

Pneumonia is an acute respiratory infection of lungs, in which the small air sacs called alveoli are filled with pus and fluids, making breathing painful.

Community-acquired pneumonia is usually caused by breathing in germs that live in mouth, nose or throat and occurs outside the hospital or healthcare centres. It is the most common type of pneumonia diagnosed in the US, with five to ten million cases reported each year.

The most common causative agent of the disease is streptococcus pneumoniae, while other pathogens such as staphylococcus aureus, haemophilus influenza, enterobacteriaceae, legionella pnuemophila, mycoplasma pneumoniae and chlamydophila pneumoniae may also cause it.

The disease is associated with symptoms such as high fever, shaking chills, cough with phlegm (slimy substance), shortness of breath, chest pain during breathing or coughing, nausea, vomiting and diarrhoea.

Solithera (solithromycin) is a next-generation microlide and the first fluoroketolide, which has anti-microbial properties is that make it active against aerobic and anaerobic gram-positive cocci.

The drug’s anti-microbial property is due to the microlide ring, which is a lactone with one or more deoxy sugars (cladinose and desosamine). The ring reversibly binds to the 50S subunit of the bacterial ribosome and blocks the protein synthesis to prevent the bacterial growth and reproduction.

The NDA and MAA for the Solithera as a treatment for community-acquired bacterial pneumonia was submitted to the FDA and EMA respectively based on the results obtained two phase three clinical trials namely Solitaire-oral and Solitaire-IV.

Solitaire-oral was a double-blind, active-controlled, multi-centre trial conducted to evaluate the safety and efficacy of the drug. It enrolled 860 patients with moderate to severe CABP, who were randomised 1:1 on either oral solithromycin as 800mg loading dose and 400mg once a day for five days or oral moxifloxacin for seven days.

Solitaire-IV was a double-blind, active-controlled, multi-centre trial conducted on 863 patients with moderate to severe CABP to evaluate the safety and efficacy of Solithera (solithromycin).

Cempra is conducting an additional phase three trial named Solitaire-U in Australia and the US on 300 patients with uncomplicated gonorrhoea and Chlamydia infections to compare the efficacy of single oral dose of 1,000mg of solithromycin to 500 mg of ceftriaxone administered intramuscularly, along with 1,000mg oral azithromycin.

Biovian is a one-stop-shop providing GMP contract manufacturing of biopharmaceuticals....